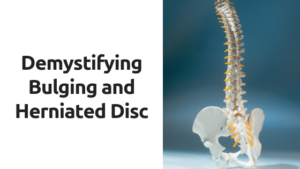 Within the spine you have numerous structures, but the two we’re focusing on here are your vertebrae (the individual bones of the spine), and the discs (the cartilage ‘cushion’ in between each of those vertebrae). These discs act as shock absorbers that allow your spine to move in different directions and deal with regular impact without damaging the other spinal structures.

So, what is a bulging disc and what is a herniated disc?

A bulging disc occurs when the entire disc bulges out of its normal space. Think of it like this; if you were to put a chunk of playdough between two plates and squeeze them together evenly, the playdough would act as a cushion, with the full weight being distributed throughout the entirety of that playdough. But if you squeeze those plates together on one side only, you’d see the playdough protrude, or bulge, out the side that has the largest opening, right? This is essentially what’s happening with a bulging disc. Most of us have posture and movement habits that put an uneven pressure on those discs on a regular basis; that’s perfectly normal. And while that itself is not quite enough to cause any major issues, over time this can create weakness in ligaments and other stabilizing structure, allowing more of that disc to protrude out.

A herniated disc is a bit different. For simplicity’s sake, let’s compare your disc to a jelly donut. You’ve got this tough outside portion that holds in the filling. That’s pretty much how your disc is made; a tough cartilage “donut” filled with a softer gelatinous component. That tough outside keeps the jelly from leaking out. Now imagine that with wear and tear over time and a lot of uneven pressure applied on that donut, the outer layer starts to stretch and thin, allowing some of that jelly to push out. This is essentially what’s happening in a herniated disc. The outer portion thins and allows part of the inner structure of the disc to push out of the normal disc space.

While this may all sound a little scary, I mean, discs coming out of their normal space, AAAAHHH…studies have shown that many people with bulging and herniated discs have absolutely no pain associated with them. The discs themselves have no nerve ending where you could even tell there’s a “problem”. The only time you’d even recognize that there may be something going on would be if you started to experience pain, and that only happens when the disc puts pressure on a nerve. And while that’s absolutely possible, it’s just as possible to live a normal pain-free existence with a bulging or herniated disc for years.

In fact, these bulging and herniated discs tend to happen as a completely normal part of aging. While some bulging and herniated discs can be caused by poor posture and movement patterns or injury to the spine, most cases are just what happens as we get older. Again, this doesn’t necessarily translate into a painful or even noticeable condition, but if it does, patients can experience pain, numbness, and tingling within the low back, hip, and down the leg as well as a loss of range of motion. While not the only way to feel this, one of the most common and obvious is if you’ve ever “thrown your back out”. If you’ve felt this, you’ve likely irritated one of these disc issues you may not have even known you had. That sudden inability to stand up straight after bending forward along with pain or tingling, are classic signs of a sudden nerve compression due to a bulging or herniated disc. Rest and extension exercises are some of the best quick fixes to get you standing up again at least, but it’s still important to seek out treatment.

If you’re experiencing these symptoms, whether it’s that sudden unmistakable type, or the slow, only occasional bout of symptoms, it’s important to seek proper imaging and testing from your doctor and/or physical therapist to get you on the right track for therapy. This is not something to put off. The sooner you can manage this, the better the results of treatment.

The key to treatment is to take the pressure off of the nerve, since that’s what’s causing the pain. To do this, physical therapy is often recommended to not only learn movements and positioning patterns to take that pressure off ASAP, but also to teach you new ways of moving that can prevent that nerve pressure from being applied by the disc again.

While these terms may sound like a dreadful diagnosis, many people never experience pain or recover from short periods of pain with the right treatment protocols. Others, with more severe symptoms, require more invasive treatments like nerve blocks and surgery. Whatever you’re feeling, it’s important to get under a doctor or physical therapist’s care as soon as possible to correct the issue and prevent any worsening.