Cupping. What It Is And Why You Should Try It 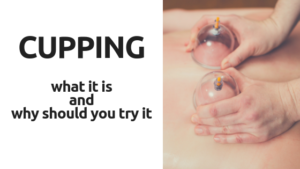 Cupping is a traditional Chinese therapy that’s been used for thousands of years, but it gained even more popularity in 2016 when everyone noticed that Michael Phelps had large perfectly round discolorations on his back while competing in the Olympics. Many people before that had never heard, or never been exposed to this type of bodywork. During a cupping session at my studio, I’ll use cups made of silicone, and/or plastic. The approach of your treatment will be adjusted to your needs and preferences. Some prefer stationary cupping which means leaving each cup in place for several minutes. Others prefer to keep the cups moving to get a broader effect and reduce the likelihood of marks being left on the skin. And still others prefer a combination of both stationary and moving cupping. During the Bellanina treatment (or upon request in a general massage session) facial cups are used, which do not leave any marks.

Cupping is in fact a type of massage. It can be used to decrease swelling by stimulating lymphatic flow and increasing superficial blood circulation. It creates negative pressure instead of positive pressure; so instead of pushing into those tight tissues in an attempt to separate and realign fibers, those tissues are being pulled apart. This offers a far less intense feeling of pressure and discomfort than a typical “deep” massage, but with similar effects. There are also many health claims in the world of cupping that say cupping can help reduce cellulite, cleanse your body of negative “chi” (I am happy to go further into this Traditional Chinese thought if you would like to at your appointment), helps to diffuse illness like colds and even help with wrinkles when used on the face (facial cupping is relaxing and not at all painful, many fall asleep during this portion of their session!). It is hard to confirm these claims as there hasn’t been much reliable research on the subject. Cupping is also difficult to run an experiment on, because it would be difficult to have a true control group. This would help to see the effects on those who have received treatment versus those who think they have received the treatment. When something has gained such popularity it’s hard to get down to the root of what it really does or can achieve. So I urge you to try it out and make a decision for yourself

Now that we’ve gotten the history of cupping and the claims made, let’s get down to why you should try it. Cupping is great for several reasons:

Whether you are wanting to try cupping for the health benefits you feel it will bring you, or because you just want to see what all the hype is about, let’s talk about your goals and what you’re comfortable with when you book your next session. You may be pleasantly surprised with how much you enjoy it!